Congress needs to do the math on Presidential dollar coins

Predictably members of Congress are jumping on the bandwagon to halt production of Presidential dollar coins. Since July 19 five separate bills have been introduced in the House of Representatives, all wrapped in the jargon of political Washington, seeking to stamp out government inefficiency and cut wasteful spending.

The sound bites and legislative fury were prompted by the Federal Reserve System’s June 2011 Report to Congress on the Presidential $1 Coin Program that noted the Federal Reserve Bank’s current inventory surplus of Presidential dollar coins exceeds 1.2 billion coins and at the program’s end in 2016, without modifying the current law, that number would likely swell to 2 billion.

Many reports of this nature are never read by members of Congress or the national media. Somehow, this one came to the attention of National Public Radio and then a few days later network television began railing about “the waste.” Some TV reporters even picked up the Fed’s talking points about the central bank having recently built a storage facility in Dallas at a cost of $650,000 just to store the coins and that it would incur another $3 million in shipping costs to transport the coins from current storage terminals to the new facility.

The fact that both the national media and members of Congress are either unaware of or are not talking about is that the U.S. Treasury (federal government) is making a tidy profit from the Presidential dollars. Since the program began in 2007, the government has realized $1,701,446,697 in profit that goes directly to pay down the national debt.

When the government’s coin factory (U.S. Mint) produces a Presidential dollar coin and sells it at face value to the private central bank (the Federal Reserve) it reaps a profit known as seigniorage, the difference between the costs to produce and distribute the coin and its face value.

As the accompanying table shows, the first 20 Presidential dollars struck for circulation have provided more than $1.7 billion in profit for the U.S. government. 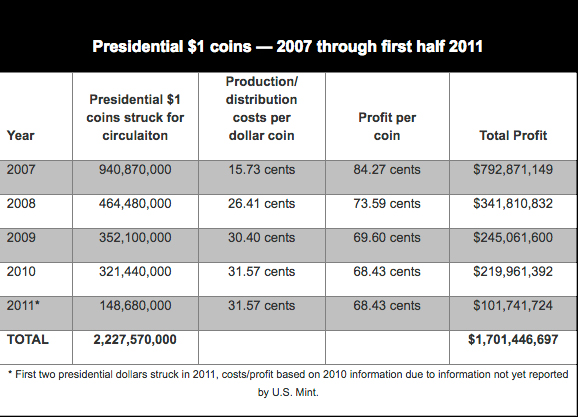