The toothy jaw belongs to a nearly complete crocodile skeleton found buried in the silt. Scientists are still working to determine the animal’s exact age and species, but the team thinks it’s been lying in the cave’s cold water for millennia and may belong to a group that’s now extinct.

In addition to the fossil croc, divers searching for ancient monkey bones found the remains of sloths, bats, birds, and other creatures lining the floors of the flooded caves.

“You often find paleontology sites where specimens are buried by tons of rock,” said team leader Alfred Rosenberger, an anthropologist with Brooklyn College in New York. “They are affected by erosion and weather, and there is an entire process from death of the animal to eventual recovery where a lot of things can be damaged.”

In the underwater caves, though, “we are finding almost pristine material.”

Diver Cristian Pittaro collects fossils, which are likely thousands of years old, from the floor of a cave in the Dominican Republic. The Caribbean country is on the eastern side of the island of Hispaniola, which it shares with Haiti (see map).

Given the region’s geologic instability, fossils aren’t well preserved in rock layers. In fact, flooded caves may hold the only existing fossil records for some Dominican Republic places and time periods, the research team says.

Remains found in the caves could therefore yield clues as to how long-vanished species lived—and perhaps even why they died out.

It took divers two trips to retrieve the large crocodile’s nearly complete skeleton, which includes the skull (pictured) as well as arms, legs, vertebrae, and a tail. (Related pictures: “Biggest Crocodile Ever Caught?”)

An expert team spent an entire three-hour cave dive excavating the partially buried remains and a second trip of equal length ferrying the bones back to the surface.

Divers Who Give a Fig

Research leader Rosenberger (right) and two divers peer down the narrow entrance under a fig tree that leads to Oleg’s Bat House Cave. The 26-foot (7.9-meter) drop ends at a watery cavern where the remains of at least four fossil crocodiles have been found.

The surprising discovery was the first evidence for crocodiles in the Dominican Republic’s eastern province of La Altagracia, according to the research team.

“I’ve been reading reports of scientists in the Caribbean during the 1920s and ’30s, and they were going into caves every day, but when they saw a pool of water at the bottom of a cave, they pretty much stopped looking,” Rosenberger said.

“Cave exploration is not for the average human being, and it is dangerous. Our guys are trained and very experienced experts.”

Diver Dave Pratt collects a sloth pelvis and a crocodile tooth from the submerged floor of Oleg’s Bat House Cave.

The Dominican Republic’s flooded caves are providing an interesting look at the large animals that once populated Hispaniola, the team says. Creatures such as sloths and monkeys used to roam the island country, but today mammals of rodent size or smaller are all that remain.

The so-called Bat Cemetery showcases how many bats once lived-and died-in the now underwater realm of Oleg’s Bat House Cave.

Rosenberger believes it’s likely that nearby caves were once populated by giant extinct owls or other raptors that littered the floors with the remains of their prey. (Also see pictures: “Bats Swarm Philippines Cave.”)

The vertebral column of a snake juts from a sandy cave floor in the Dominican Republic.

While some caves yielded monkey and other mammal fossils, Oleg’s Bat House Cave was rich in crocodiles and snakes. According to the research team, this cave likely occupied a very different ecological niche before it flooded, perhaps that of a swamp or a nearshore environment. 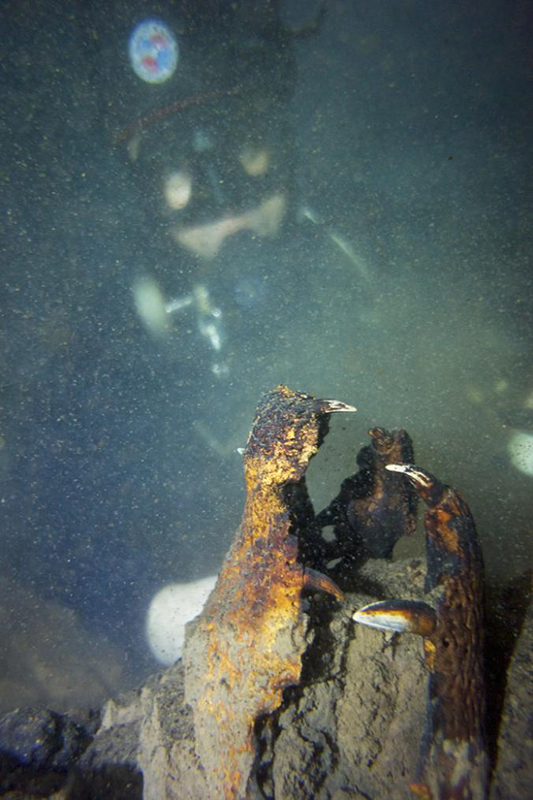 A diver approaches the huge ancient crocodile—and an unprecedented scientific opportunity. But while cold-water immersion has kept the bones looking pristine, this type of preservation makes it much harder to extract DNA.

The remains have “been sitting in a soup for a long time and have seen a lot of biodegradation,” Rosenberger said. Waterlogged bones also complicate efforts at accurate dating.