Cracking Down on Fakes 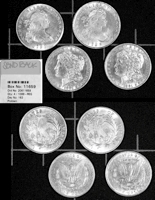 Numismaster.com | June 28, 2012. This article was originally printed in Numismatic News.

It’s time to get tough on Chinese counterfeit coins.

That’s the message executives of the Professional Coin Grading Service took to Washington, D.C., on June 27.

They warned that the problems of Chinese-made counterfeits of rare coins are getting worse and could soon expand to include fakes of rare bank notes imported into the United States.

PCGS officials cautioned that imported counterfeit coins have increased in quantity and quality, sometimes making it difficult to distinguish fakes from genuine.

“PCGS has detected over 5,500 counterfeit coins submitted in the last 12 months, a higher number by far than in any previous 12-month period,” said, Don Willis, president of PCGS, a division of Collectors Universe, Inc.

“Chinese counterfeiting is the most serious challenge faced not only by the collectibles markets and brand name products, but also by the United States Treasury,” Willis said. “Entire industries have sprung up in China to manufacture virtually anything made in American including U.S. Government issued coins. These factories and industries operate in the open and with the full support of the Chinese government. By its lack of action to stop the activities, the Chinese government endorses the counterfeiting of US coins,” Willis stated.

“Even worse, Customs and the US Government do little to stop counterfeits from entering the U.S. Once in the U.S. little effort is made to arrest and prosecute individuals selling counterfeit material. Consequently the U.S. has been flooded with counterfeit products, including coins, resulting in the loss of billions of dollars in revenue each year.”

PCGS attorney Armen Vartian was among members of a delegation of professional numismatists who met June 27 with Rep. Lamar Smith (R-Texas), chairman of the House Committee on Judiciary who introduced legislation (H.R. 5977) on June 20 to extend provisions of the Hobby Protection Act to make it unlawful to assist or support anyone who violates the Act.

Under the current federal law first enacted in 1973, it is illegal to sell unmarked replicas of coins. The Hobby Protection act requires manufacturers and importers of imitation numismatic items to mark them plainly and permanently with the word, “COPY.”

Vartian showed the congressmen examples of Chinese-made counterfeit coins that now are part of the PCGS reference collection.

Collectors Universe President and PCGS Co-Founder David Hall said counterfeiting rare coins is not a new problem, but the drastic increase in the huge quantity of counterfeits is new and potentially devastating.

What is new, Hall said, is the tremendous volume of counterfeits coming out of China, and the counterfeiting of grading service holders.

“The quality of the numismatic counterfeits is much higher than in the past,” Hall explained. The Industry Council for Tangible Assets (ICTA) identified the issue of Chinese counterfeits as its No. 1 priority last year and began seeking remedies, focusing on strengthening the Hobby Protection Act. It is urging all members of the numismatic community to contact their members of Congress to urgen to co-sponsor the bill.