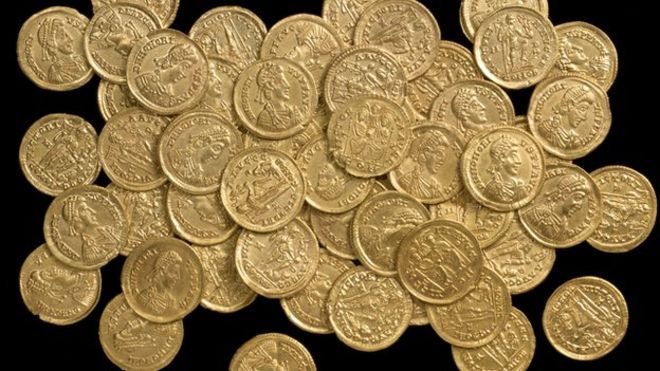 A “nationally significant” hoard of Roman gold coins has been found by a metal detectorist in Hertfordshire.

The stash – found on private land north of St Albans – is believed to be one of the largest Roman gold coin hoards discovered in the UK.

The 159 coins date to the end of the 4th Century during the final years of Roman rule in Britain. After AD 408 no more coin supplies reached the country.

The value of the hoard has not yet been assessed.

A team from St Albans City and District Council museums’ service investigated the site at the beginning of October to confirm the find.

The council said the coins were scattered across a fairly wide area and that there were “practically no other comparable gold hoards of this period”.

They were mostly struck in the Italian cities of Milan and Ravenna and issued under the Emperors Gratian, Valentinian, Theodosius, Arcadius and Honorius.

Councillor Mike Wakely called it “an exciting find of national significance” and said the coins would go on display at Verulamium Museum.

David Thorold, from the museum, said that during Roman occupation, coins were usually buried either as a religious sacrifice to the Gods, or as a secure store of wealth to recover later.

“Threat of war or raids might lead to burial in the latter case, as may the prospect of a long journey, or any other risky activity,” he said.

The curator added that gold coins were “extremely valuable” and not exchanged on a regular basis.

“They would have been used for large transactions such as buying land or goods by the shipload,” he said.

The 1996 Treasure Act legally obliges finders of historic metal objects to report their discovery to the local coroner who determines whether or not it constitutes treasure.