The Trillion Dollar Coin Solution, Or One Coin To Rule Them All: An Idiot’s Guide 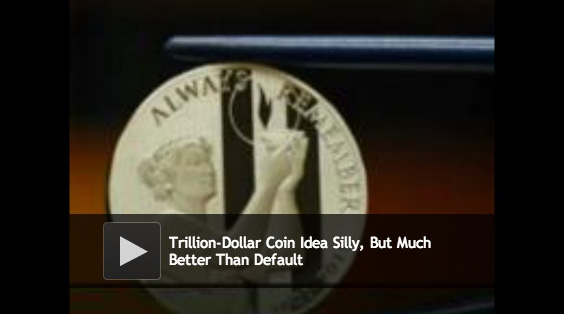 If you’ve watched business TV or read Paul Krugman lately, you may have stumbled across a strange and maybe frightening debate among policy wonks and pundits about something called a trillion-dollar coin.

What is this coin, and why should you care about it? The second part of that question is harder to answer, but the first part is easily explained. It’s a gimmick that, as Krugman wrote on Monday, President Obama could and possibly should threaten to use as a solution to a potentially devastating fight with Congress over the debt ceiling. Here’s how it–

Wait? Debt ceiling? What is that?

The debt ceiling is the maximum Congress lets the government borrow. Back in ancient times (World War I), Congress started setting a big old debt limit so that it wouldn’t have to constantly approve new borrowing, its job under the Constitution. This gives Congress the power to vote on whether to let the government borrow more money to pay off its old debts and other stuff for which it’s on the hook, including stuff it may regret now, like that unfortunate leather sofa it bought at Raymour & Flanigan, or Iraq.

Usually this is no big deal. Congress is constantly having to boost the debt ceiling. But the historically terrible 112th Congress darn near let the ceiling be breached last year, trying to wring spending cuts out of Obama. That meant the government was nearly unable to pay its debts, which would have been an economy-destroying default by the world’s biggest borrower and one of its soundest credits. The whole fiasco led to the U.S. government getting its credit-rating downgraded by Standard & Poor’s, and it set the stage for all that fiscal-cliff nonsense we just went through.

Fiscal cliff? Ugh, not that again.

Yeah, I’m sick of hearing about it, too. Unfortunately, this new debt ceiling fight is much, much, much worse than the fiscal cliff. It will involve some of the fiscal-cliff spending cuts left over from that fight, now with the added fear of a possible government default. Oh, and the current federal budget expires soon, meaning we might also get a government shutdown on top of it. This is the big one, Elizabeth.

Crap, this is not the Doomsday I was Prepping for. I bought so many sandbags! Wait, you said there was a magic coin that could save us?

Indeed there is. Theoretically, at least. The idea was first floated on the Firedoglake blog way back in January 2011 by somebody calling him- or herself Beowulf.

I totally read that in high school.

That may have been the last thing many of us actually read in high school. Anyway, Beowulf pointed out that there are a couple of obscure laws from the 1990s that let the Treasury Department produce platinum coins of any denomination whenever it wants. The point of the laws, according to their brainchild, former GOP Rep. Michael Castle, was to give Treasury the ability to raise a little cash with cool novelty coins.

But Beowulf figured out that the Treasury can legally use these laws to print whatever coins it wants — including trillion-dollar coins — and then deposit them into its bank account at the Federal Reserve, in exchange for a bunch of cash it can use to pay off its debts. That would render the debt ceiling meaningless, because the government wouldn’t have to borrow again. For a while.

Hang on, the Treasury has a bank account at the Fed?

Yes, like a checking account. Whenever the Treasury Department collects tax money from you, for example, it puts it into its Fed account, and then it uses that money to pay its bills, too. According to Beowulf’s idea, Treasury could just print up a big old coin, carry it down to the Fed, and because it was legal tender, the Fed would have to let Treasury play with its actual money.

Hmm, this sounds kind of crazy, and maybe stupid also!

No doubt. The idea is in fact crazy and at least partially stupid, as many of its proponents will tell you. But it is crazy like Jonathan Swift’s proposal to eat children was crazy: It is a craziness intentionally designed to highlight another, more realistic and dangerous flavor of crazy. In Swift’s case, that crazy was the heartlessness of Irish policy makers in the 18th Century. In the case of the growing crowd calling for the Trillion-Dollar-Coin solution — including, recently, prominent economists Paul Krugman and Mark Thoma and Rep. Jerrold Nadler (D-N.Y.) — the craziness being highlighted is the very dangerous insanity of House Republicans, who are threatening to make the U.S. government default on its debts, triggering a global financial panic, in order to wring some spending cuts out of President Obama.

“Republican intransigence over the debt ceiling is juvenile,” Bloomberg’s Josh Barro wrote on Monday. “There is no particular reason that the president should not use a juvenile strategy in response.”

Well, it’s a moot point anyway, because we don’t have trillions of dollars’ worth of platinum.

We don’t need trillions of dollars’ worth of platinum, because the mid-1990s laws give the Treasury Department the right to print up a coin made out of just a little bit of platinum and stamp whatever denomination it wants on it. One trillion, two trillion, whatever.

OK, but all of this money printing is going to cause inflation, won’t it?

Not necessarily. The same amount of money will be in the financial system whether the Treasury Department uses a giant coin or just keeps borrowing money. There is a risk of inflation expectations rising as investors see these trillion-dollar-coins getting thrown around. Expectations of higher prices can make inflation a self-fulfilling prophecy. But Obama could promise to use the coin just this once, to avoid this debt-ceiling default. He could even sign on to the bill proposed on Monday by Rep. Greg Walden (R-Ore.) blocking the use of the coin, in exchange for a promise by Congress to do away with the debt ceiling forever, as Cullen Roche of Orcam Financial Group proposed on Monday.

Whose face would go on the coin?

Why, John Boehner’s, of course. Update: Though there are lots of other options.

OK, I’m sold. When is this going to happen?

Hmm, let’s check our calendars. How about never? Does never work for you?

It is almost certainly not happening, because it is antithetical to everything Obama and Treasury Secretary Timothy Geithner have stood for in the past four years. It’s a safe guess it is also probably a nonstarter for likely future Treasury Secretary Jacob Lew. It’s hard to imagine Fed Chairman Ben Bernanke would react well to being asked to cash a $1 trillion gold coin.

Felix Salmon argues that it’s far too childish a maneuver for Obama to safely use without sparking a global panic, and it’s likely that Obama sees it this way, too.

“There’s exactly zero chance that the House Republicans, faced with the Coin Threat, will suddenly turn logical and decide that they’re not going to play political games around the debt ceiling after all,” Salmon wrote on Monday. “Rather, the Coin Threat is a political game, played by the other side: it’s the executive branch bringing itself down to the House Republicans’ level.”

Has that been Obama’s style lo these past four years? No. Instead he has hastened at every opportunity to show himself to be the guy who won’t shoot the hostage or print the giant magic coin, sometimes to his detriment.

The coin idea may also be unconstitutional, letting the President usurp powers that have been given exclusively to Congress, suggests CNBC’s John Carney. Obama has already said his lawyers don’t like the idea of getting around the debt-ceiling fight using the 14th Amendment to the Constitution, which mandates that “the validity of the debt… shall not be questioned.” This further-out-of-the-box idea sounds like another thing his lawyers, and political advisors, won’t like.

The likelier outcome is that Obama and Republicans will strike another harrowing last-minute deal that makes nobody happy and freaks everybody out for several weeks. It’s how our Forefathers would have wanted it.