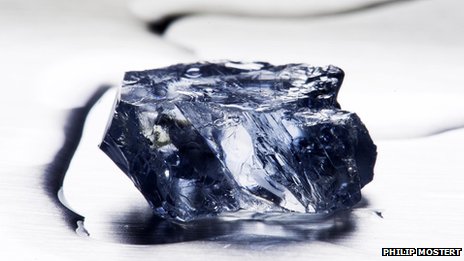 A rare blue diamond has been unearthed at a mine in South Africa.

(Image above: The company said it was unusual for such a diamond to go on sale)

The 25.5-carat stone was recovered by Petra Diamonds at its Cullinan mine and is expected to bring large profits.

Experts say it could be worth more than $10m (£6m), and the find gave a boost to Petra’s share price.

Similar finds in recent years from the Cullinan mine have commanded high prices and Petra, with operations in Botswana and Tanzania, is expecting a high level of interest from buyers. 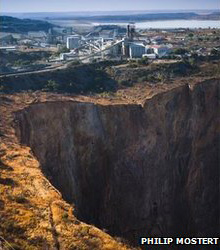 “It’s very unusual for a diamond of this quality and size to come to market,” said company spokeswoman Cathy Malins.

The mine, north-east of Pretoria, has produced hundreds of large stones and is famed for its production of blue diamonds.

(Image right: The Cullinan mine is famed for the production of blue diamonds).

A similar 26.6-carat blue rough diamond discovered by the company in May 2009 was cut into a near perfect stone and fetched just under $10m at a Sotheby’s auction.

It was named the “Star of Josephine” by its new owner.

Another deep-blue diamond from Cullinan was auctioned for $10.8m last year and set a world record for the value per carat.

In 1905, the renowned Star of Africa blue diamond – the world’s second largest cut diamond – was discovered at the Cullinan mine.

The pear-shaped 530-carat stone was presented to King Edward VII and became part of the British crown jewels.