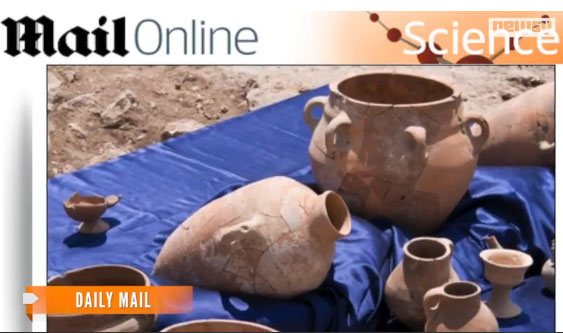 After many years of searching, Israeli archaeologists announced Thursday the discovery of a large palace and storeroom believed to have once belonged to the Biblical monarch King David.

“The ruins are the best example to date of the uncovered fortress city of King David,” lead researchers Yossi Garfinkel and Saar Ganor said, according to the Jerusalem Post. “This is indisputable proof of the existence of a central authority in Judah during the time of King David.”

Finding evidence of King David, who is believed to have ruled over the Kingdom of Judah during the 10th century BCE, is a common goal of researchers in Israel because of his prominent role in Biblical history, the New York Times notes. A palace could help prove that King David was an impressive man, as the Bible suggests, and not a small chieftain.

During the past year, Garfinkel and Ganor uncovered two large buildings at the site, believed to be part of the regional city of Shaarayim. One of the buildings was identified as a palace, while the other is believed to be a very large royal storeroom.

The storeroom contains evidence that can help researchers date the site.

“This is the only site in which organic material was found — including olive seeds — that can be carbon-14 dated [to King David’s time],” Israel Antiquities Authority spokeswoman Yoli Schwartz told The Times of Israel.

All told, the researchers at Khirbet Qeiyafa have uncovered a large portion of city wall, two gates, a pillar building and 10 houses, according to the IAA. The group noted that the famous battle between the young shepherd David and the monstrous Goliath is believed to have occurred in the area.

The site is of such historical importance that Israeli authorities have canceled a planned development project in the region and will protect the area as a national park.

This is not the first time archaeologists have announced what they believe to be evidence of the figure. In 2008, Israeli archaeologist Eilat Mazar said that she found what she believed to be King David’s palace in an ancient area of Jerusalem by using Biblical descriptions to guide her excavations. However, the Times of Israel notes that Mazar’s findings remain controversial, due in part to her dependence on a literal reading of ancient religious texts during her research.