World’s Most Valuable Coin on Display in New York

The New-York Historical Society is displaying one of the world’s most famous and storied coins – the 1933 Double Eagle. Designed by the renowned sculptor Augustus Saint-Gaudens, the coin features the figure of Liberty striding before the Capitol Building on its face and an eagle in flight on the reverse.

In 1933, in the midst of the Great Depression, the United States struck almost a half million twenty-dollar gold coins, commonly known as Double Eagles. At virtually the same time, in one of his first acts as President, Franklin D. Roosevelt signed an Executive Order banning the payout of gold, weaning the country off the gold standard.

The 1933 Double Eagles, although legally made, became illegal to own and were never circulated. In 1934, two examples were sent to the Smithsonian Institution for posterity, and in February 1937 the rest were melted into gold bars and sent to Fort Knox – or so it seemed.

In 1944, a 1933 Double Eagle appeared in a New York auction, and the United States Secret Service launched an investigation. It determined that a U.S. Mint employee had stolen a number of the coins in 1937 and identified ten 1933 Double Eagles that had escaped destruction, of which nine were surrendered or seized. One was beyond reach, as it had been purchased by King Farouk of Egypt, and after 1954 it disappeared. In 1996, as part of a Secret Service sting at the Waldorf Astoria, a British coin dealer was arrested while trying to sell a 1933 Double Eagle, which he swore had formerly belonged to King Farouk.

In 2002, at the conclusion of lengthy legal proceedings, the coin was sold at auction for $7,590,020, nearly doubling the previous world record. That very coin – the only 1933 Double Eagle which may be legally owned by an individual – is now on display at the New-York Historical Society, on temporary loan from an anonymous private collection.

Since the record-setting 2002 auction, the remarkable history of the 1933 Double Eagle has inspired four books, a documentary produced for the Smithsonian Channel, and an episode of the television show The Closer. The coin also has been displayed at the Federal Reserve Bank of New York. 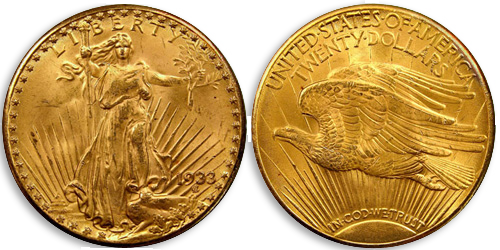