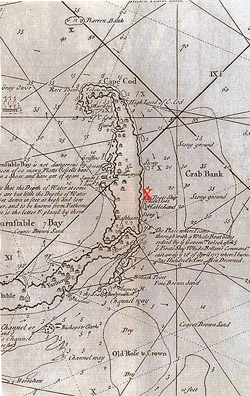 Finding buried pirate treasure is something we have all dreamed about at one time or another. The facts are that pirates didn’t bury their treasure. They spent it, then moved on in search of their next victim. Pirates lived for today, not being overly concerned if they might still be alive tomorrow.

Due to this lifestyle, pirate treasure has never been discovered, until now. It has been recently confirmed that the Whydah shipwreck first discovered off the coast of Cape Cod in 1984 is a pirate ship. More than 10,000 gold and silver coins were on board when the ship sank in a storm in 1717. The former slave ship was commanded by “Black Sam” Bellamy at the time of the ship’s demise.

Although this pirate treasure wasn’t intentionally buried in a treasure chest as we might expect it to be portrayed in a movie, it is nevertheless pirate treasure that met a watery end in Davy Jones’ Locker. This is the first time coins have been confirmed to be found in the context of being pirate treasure.

Samuel “Black Sam” Bellamy commanded the 100-foot Whydah when on April 26, 1717, the ship sank north of what is now Marconi Beach off Wellfleet, Mass., in a violent storm. Bellamy was allegedly returning to the area to pursue his love interest with Maria Hallett, also known through Cape Cod legend as the Witch of Wellfleet.

Two of the 146 crew on board survived. Bellamy did not. One the survivors later testified that there were 180 bags of gold and silver divided among the crew as the crew’s share from ships that had been looted by Bellamy.

Witnesses to the demise of the ship noted the ship capsized and split into two, with its cannon and cargo going to the floor of the ocean.

Stories regarding treasure finds can become embellished as time goes on, but since 1984 Barry Clifford, who discovered the wreck, has retrieved more than 10,000 coins plus additional artifacts from the Whydah.

One of two coins recovered by Clifford that were offered through Daniel Frank Sedwick LLC has since sold for about $11,400. Very recently one of Clifford’s divers encountered an L-shaped concretion that appears to be coin-shaped disks fused together from having been in the salt water for more almost three centuries. This find has been taken to a lab in Brewster where it was X-rayed. According to Clifford, the coin-shaped disks appear to have been stacked as if they had been counted, then placed in a bag.

Analysis of the find also indicates a presence of gold fragments and dust.

According to Clifford, “It had to be coming out of the ship in bags.” Clifford further considers the find to be “a treasure trove of history…This is the only documented pirate treasure that’s ever been discovered.”

Clifford also revealed that the late historian and archivist Ken Kinkor encountered a document suggesting there could have been as many as 400,000 coins beyond the treasure on board at the shipwreck site. To date the site has yielded 60 cannons and 400 pieces of Akan gold jewelry in addition to the coins.

Details of the coins recovered to date were not available at the time this article was being written, but appear to be primarily Spanish colonial American silver cob coins, likely the majority being of the 8-reale denomination.

Many of the recovered items are on display at the Whydah Pirate Shipwreck Museum in Provincetown, Mass.