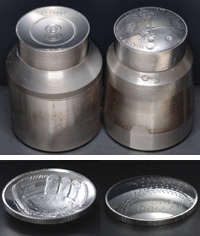 It’s a great design: A commemorative coin for the National Baseball Hall of Fame with an image of a baseball glove on the obverse and a baseball on the reverse.

Great idea, but a bear to execute. Just ask Steve Antonucci, head of Digital Development, Research and Development at the U.S. Mint in Philadelphia.

“It was a daunting challenge. A real brain bender for all of us,” he said. “But we’re feeling very good about it now.”

The good feeling comes after months of testing the best processes for minting the $1 silver dollar and $5 gold half eagle.

But the real challenge was producing a domed copper-nickel clad half dollar, which originally was to be a flat coin.

“As we went through the process of minting the gold and silver coins, and we saw how beautiful they were, Acting Mint Director Dick Peterson challenged us with producing a domed coin for the clad version as well.”

And a challenge it was. In fact 90 percent of the research and development effort to perfect the domed commemoratives was spent on the clad half dollar.

“There were a lot of trials and tribulations,” Antonucci said.

His team first examined concave/convex coins that had been produced by the Australian Mint and Monnaie de Paris. Then it created dies and did test strikes for the silver coins, followed by the $5 gold coins. To adjust for the softness of the gold, the dome height had to be reduced a few percentage points, Antonucci said.

Then it was on to the clad half dollar.

“The material is so hard that die failure was a big problem for us,” Antonucci said. “There was a lot of stress and strain on things we normally don’t see because we mint flat coins.”

The clad coins would be produced from copper-nickel blanks used for half dollars. Antonucci said a die for a half dollar can usually be used to strike 10,000 coins.

But how would that die life translate when minting domed coins?

“Our very first concern was the lamination (the layer of nickel over a copper core),” he said. “We were concerned that with the high dome, the top or bottom layer would come off.”

So the team started slow, striking 40 to 50 coins per die with no sign of delamination.

“But as we approached a 100-coin die life we saw dies crack. We saw a problem,” he said. “That’s when a lot of engineering came in to analyze stress on these coins and what changes we could make to reduce those stresses.”

There were a fair amount of surprises along the way.

“We have vast experience striking coins of all compositions,” Antonucci said. The Mint has benchmarks for the tonnage or force needed to strike a coin, depending on the material.

“Tonnage is a very key issue of die life,” he said, “but when we got into this project we noted that our tonnages were about 30 percent lower than normal.”

The die tests used “nonsense” designs featuring an 8 ball (with stitching similar to what would be found on a baseball design) for the convex reverse and a billiard scene for the concave obverse.

“We were trying to put together geometry representative of what we might see, but we didn’t want anyone to think we were leaning to any one design,” Antonucci said.

At that point it was focused on testing the heights of relief and degree of curvature.

Along the way they modified some stitching and reliefs, but in the end the Mint will still surpass anything the Australian or French mints have produced, Antonucci said.

“The designs now are three or four times the height of theirs,” he said. “We wanted the maximum relief we could get on this coin. We wanted to see how far we can push the heights of relief.”

The months of testing didn’t interfere with the daily production at the Mint because it was conducted in the new Research and Development facility.

And when it comes to minting the coins, every Mint facility will get a piece of the pie.

The Mint will take orders the first part of 2014, but doesn’t expect to deliver the coins until spring, according to Mint Director of Public Affairs Tom Jurkowsky.

It also will mint to demand, which means at some point it will stop taking orders. There will not be an inventory of coins from which to order down the road.

“This project has been a great combination of engineering, artistry and attention to detail,” Jurkowsky said. “It runs the whole gamut. We had to do it right to maintain our reputation for excellence and quality.”