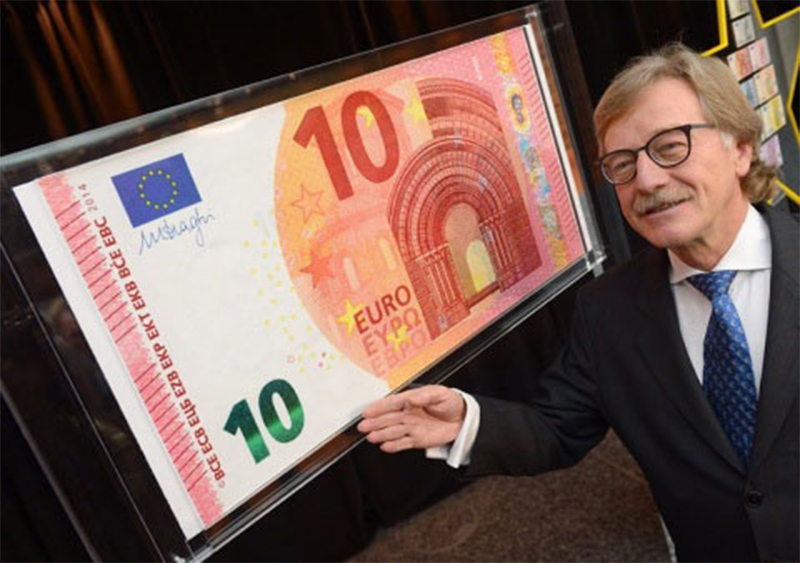 The new 10-euro note, boasting a range of new security features, has been unveiled by the European Central Bank (ECB) in Frankfurt.

The note, which will go into circulation on 23 September 2014, has security features including raised print, a portrait watermark and a hologram.

The ECB’s Yves Mersch said the new notes would enable everyone who uses them to “do so with complete confidence”.

The European Central Bank (ECB) has released an online game to explain the features of a new 10 euro note.

It is similar to the game Tetris, except every time you complete a level it tells you about a security feature.

The top 20 highest scoring players will win a 5 euro VIP banknote from the Europa series, personally signed by the president of the ECB.

A further 80 runners up will receive a commemorative 10 euro banknote from the first series.

The European Commission has published a selection of interactive games and other activities to illustrate the workings of the eurozone.

The new 10 euro banknote will be unveiled on 13 January, 2014 and start circulating later in the year.

Players must be over the age of 18 and have to uncover four of the security features.

Among these will be raised print, a watermark and a hologram.

They also must guess the number of euro banknotes in circulation in the euro area on 31 December, 2013.

Christine Graeff, from the ECB, said: “The euro is the most visible and internationally known symbol of a united Europe. 334 million people use euro banknotes every day.

“This game is a fun way to remind all of us to take a closer look at them.”