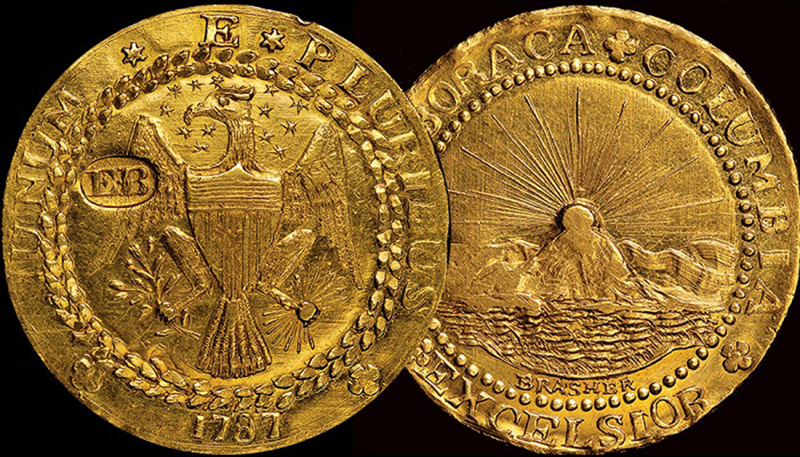 The finest-certified 1787 Brasher, Punch on Wing doubloon sold at auction Jan. 9 in Orlando, Fla., for $4,582,500, considerably less than the coin’s seller anticipated.

Many in the standing-room-only crowd for Heritage Auctions’ Florida United Numismatists auction, especially consignor Walter Perschke, expected the coin to sell for more than double that price.

Perschke said just before the auction began that he had analyzed historical price appreciation for the past 35 years to arrive at an estimate of a value of between $8 million and $10 million.

The Chicago numismatist was visibly disappointed with the auction results, walking out of the auction room soon after the lot, the first of Heritage’s Platinum Night auction, hammered down at $3.9 million. Perschke offered a simple “No comment” when asked by Coin World for an interview.

Bidding opened at $3.6 million, and after several $100,000 bid increments between Internet bids and phone bids accepted by Heritage on the floor, the winning $3.9 million bid was placed by a phone bidder. The final price included a 17.5 percent buyer’s fee.

When interviewed shortly before bidding began, Perschke said he decided to part with the doubloon after nearly 35 years of ownership because “it seems like high end numismatic coins are selling for significant money. There’s never going to be a perfect time.”

One longtime collector called the price garnered for the doubloon as “the biggest steal in numismatics.”

The coin had been off the market for more than three decades. Perschke purchased the doubloon for $430,000 in a Rare Coin Company of America auction in 1979. The coin was described as “Almost Uncirculated” when offered in that sale.

Researchers know of seven 1787 Brasher doubloons of what is called the New York Style and two examples of the 1786 Brasher doubloon of the Lima Style, the latter modeled after a 1742 gold 8-escudo coins struck at the Lima Mint in Peru.

The previous most recent transaction involving a Brasher doubloon was the $7,395,000 paid Nov. 29, 2011, by an anonymous buyer for the unique 1787 Brasher, Punch on Breast doubloon in a transaction brokered by Blanchard & Co. from Baton Rouge, La. That coin is certified About Uncirculated 50 by Professional Coin Grading Service.

Brasher also regulated precious metals coins for the Bank of New York. As a regulator, Brasher checked a coin’s fineness and weight, then countermarked it with his EB hallmark if the coin met the standards of the day. Bank tellers could then accept the regulated coins without having to check their weight.

Researchers currently believe that the Brasher doubloons had a contemporary face value of $15, based on research by numismatist William Swoger published in the June 1, 1992, issue of Coin World reinterpreting the gold coin’s intended value.

In 1787, “dollar” was understood to mean the “Spanish milled dollar,” or the silver 8-real coin minted for Spain and its colonies. By the time Brasher struck his gold pieces, New York had officially established a new $15 standard.

The 1787 New York Style doubloon’s obverse depicts an eagle beginning to open its wings, with the EB punch either on the eagle’s breast, in the case of the unique example, or on the eagle’s right wing (viewer’s left) on the other six examples.

The reverse depicts the arms of New York, with the sun rising over a mountainscape. Brasher’s surname appears below as BRASHER.

The two Lima Style doubloon coins, although dated 1742, were produced in 1786, researchers believe, in Brasher’s efforts toward making a circulating coin for local use.