Why You Shouldn’t Put Your Money Where Your Mouth Is! 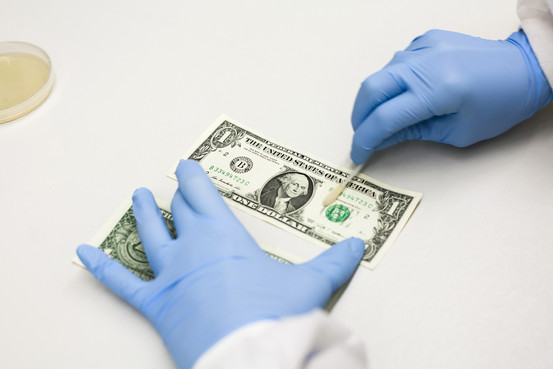 (Image Above: NYU researchers found that currency is a medium of exchange for hundreds of different
kinds of bacteria as bills pass from hand to hand. )

Talk about dirty money: Scientists are discovering a surprising number of microbes living on cash.
In the first comprehensive study of the DNA on dollar bills, researchers at New York University’s Dirty Money Project found that currency is a medium of exchange for hundreds of different kinds of bacteria as bank notes pass from hand to hand.

By analyzing genetic material on $1 bills, the NYU researchers identified 3,000 types of bacteria in all—many times more than in previous studies that examined samples under a microscope. Even so, they could identify only about 20% of the non-human DNA they found because so many microorganisms haven’t yet been cataloged in genetic data banks.

Easily the most abundant species they found is one that causes acne. Others were linked to gastric ulcers, pneumonia, food poisoning and staph infections, the scientists said. Some carried genes responsible for antibiotic resistance.

“It was quite amazing to us,” said Jane Carlton, director of genome sequencing at NYU’s Center for Genomics and Systems Biology where the university-funded work was performed. “We actually found that microbes grow on money.”

Their unpublished research offers a glimpse into the international problem of dirty money. From rupees to euros, paper money is one of the most frequently passed items in the world. Hygienists have long worried that it could become a source of contagion.

A U.S. one-dollar bill, printed on a cotton-linen blend, lasts little more than 21 months. In all, the U.S. Federal Reserve System is spending $826.7 million on new money this year to make 7.8 billion bank notes with a total face value of $297.1 billion.

To make cash more durable, countries from Canada to the Kingdom of Bhutan are printing bank notes on sheets of flexible plastic polymer film, with implications for the microbiology of money.

In a study of the public-health effect of new currency materials, researchers at Australia’s University of Ballarat recently tested bills taken in change from supermarkets, coffee shops and cafeterias in 10 countries.

While levels of bacteria varied widely from place to place, they usually found fewer on polymer bills than on cotton-based ones, according to their 2010 study in the journal Foodborne Pathogens and Disease.

“The thing about a polymer note is that it is not absorbent,” said Mr. Etienne. “There is a cleanliness benefit, which is a health issue.”

Other researchers tried growing bacteria on seven different currencies. They found that some germs survived longer on the plastic bank notes, according to tests published last year in Antimicrobial Resistance and Infection Control.

A human touch compounds the problem. Bacteria can feed on the waxy residue of skin and oils that builds up on bills in circulation.

“We provide the nutrients when we handle the bank notes,” said Brown University physicist Nabil Lawandy, who is president of Spectra Systems Corp. in Rhode Island, which designs currency-security features for 19 central banks.

Researchers have also explored the fibrous surface of paper money. Using traditional cell-culture techniques, research groups in India, the Netherlands and the U.S. have isolated about 93 species of bacteria clinging to paper bills. In 2012, microbiologists at Queen Mary University of London found that about 6% of English bank notes tested had levels of e.coli bacteria comparable to a toilet seat.

Generally, the NYU researchers could identify so many more species than previous efforts because high-speed gene sequencing and computerized database analysis allowed them to recognize life forms by their DNA, rather than by isolating the cells in culture and studying them under a microscope.

In their experiment, the NYU researchers analyzed the DNA found on 80 $1 bills that they collected last year from an unnamed bank in Manhattan.

All told, the dollar bills yielded about 1.2 billion DNA segments. It took 320 gigabytes of digital storage to hold all the genetic data—roughly the amount needed to hold an entire library of traditional medical texts. “We were casting the broadest possible net,” said NYU senior research scientist Steven Sullivan.

The DNA was as diverse as New York. About half of it was human. The researchers found bacteria, viruses, fungi and plant pathogens. They saw extremely minute traces of anthrax and diphtheria. They identified DNA from horses and dogs—even a snippet or two of white rhino DNA.

“We had a lot of the spectrum of life represented on money,” said NYU genome researcher Julia Maritz, who did much of the DNA analysis.

Dirty Dollars
In the first genome study of the DNA on money, NYU researchers identified 3,000 types of bacteria on a set of one-dollar bills collected in New York.

Corrections & Amplifications
The bacteria found in a study of DNA on money included Staphylococcus aureus, Escherischia coli, Helicobacter pylori and Corynebactrium diptheriae. A chart in an earlier version of this article misspelled the bacteria.