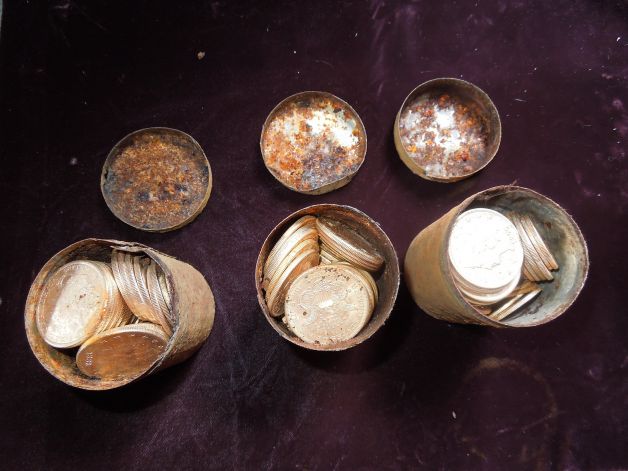 Gold coins worth an estimated $10 million from the California Saddle Ridge treasure hoard will come to market starting May 27.

Don Kagin told the Chicago Coin Club April 26 that at 11:30 p.m. Eastern Daylight Time on May 27 a single 1874-S $20 gold piece will be sold in a live auction at the Old San Francisco Mint. Proceeds will be used toward the facility’s restoration.

A half hour later, at midnight, the rest of the 1,427 coins will be offered at fixed prices on www.Amazon.com/treasure and www.kagins.com.

The cheapest coins to be offered will sell for $2,500 plus packaging and shipping. These pieces are the damaged coins, though they will always be associated with the excitement of the Saddle Ridge treasure, Kagin said.

Undamaged coins, graded by the Professional Coin Grading Service in various circulated grades, will be priced in the $3,000-$3,500 range.

An 1866-S No Motto $20, which is the finest known at PCGS MS-62+, is valued at approximately $1 million, according to previous publicity.

Joining Kagin for the talk was David McCarthy, who has worked for Kagin since 2003 and is the firm’s senior researcher.

He told the story of the unidentified northern California couple who while walking their dog in February 2013 found the first of eight canisters of gold coins that McCarthy later identified as baking powder tins.

The couple eventually found all eight and for a time actually reburied them under a woodpile elsewhere on their property.

They called a lawyer, who in turn reached out to McCarthy at Kagin’s.

Another coin dealer was contacted by the lawyer, but his offer of $40 per coin over melt value helped cinch the deal for Kagin’s.

Kagin said, “There is no credible claim to the coins other than the finders.” He said he had a five-page report that had examined the issue.

McCarthy knocked down an online theory that these coins might be from a 1901 theft from the San Francisco Mint by Walter Dimmick.

The Mint wrote a letter that says there is no evidence to tie these coins to the theft and McCarthy adds that those coins would have been 1900-S and 1901-S coins not the earlier dates that comprise the Saddle Ridge coins.

McCarthy said he was able to identify the canisters as Golden Gate brand baking powder cans of a style used in the middle 1880s, which was consistent with the dates of the coins in them (1847-1894).

Though he did not reveal where the coins were found, he described the location as in a “fairly remote area near several property lines.” He also said the spot was hidden from view on three sides along a ridge line path that the couple used to walk their dog.

McCarthy was able to remove the encrustations from the coins by soaking them in four different solutions that he did not want to identify.

Many of the coins now look like they have just come off San Francisco Mint presses.

Would-be buyers, start your count down.