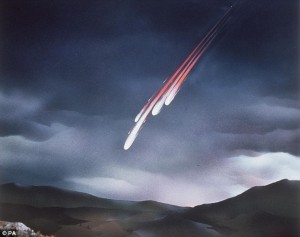 This may be old news to some, but for many it wont be. A study published in the Journal of Archaeological Science in December of 2013 found that the earliest known (according to the study) iron artifacts that date back to circa 3200 BC, from two burials in northern Egypt were made from meteoritic iron, and shaped by careful hammering of the metal.(1) After hammering pieces into thin sheets before being rolled into tubes, the nine beads that were found were originally strung into a necklace with other materials like gold and gemstones. This discovery reveals the value of these materials in ancient times. It also reveals that in the fourth millennium BC, metal workers had mastered the smithing of meteoritic iron, well before what was previously thought.

The beads were excavated in 1911, found in a cemetery, and are believed to be the earliest known iron artifacts. A total of nine beads were retrieved, and the necklace beads were found in their original order. Since both tombs securely date back to Naqada, 3400-3100 BC, the beads predate the emergence of iron smelting by nearly 2000 years, and other known meteoritic iron artefacts by 500 years or more.

“The really exciting outcome of this research is that we were for the first time able to demonstrate conclusively that there are typical trace elements such as cobalt and germanium present in the beads, at levels that only occur in meteoritic iron. We are also excited to be able to see the internal structure of the beads, revealing how they were rolled and hammered into form. This is very different technology from the usual stone bead drilling, and shows quite an advanced understanding of how the metal smiths worked this rather difficult material”– Professor Rehren

There is a lot of mystery surrounding Egypt, but the fact that they made cosmic jewelery is pretty cool. We don’t often reflect on just how advanced civilizations were in these times. Even today, how the pyramids were built, the mathematical precision and the astronomical alignments that correlate with them are astonishing. If we wanted to do something like that today, even with all of our technology, it would still be almost impossible to recreate. There is a lot of evidence to suggest that these ancient civilizations were much more advanced than we are. I find it quite amusing that they knew that the Earth was round, before we even believed it to be flat!

Ancient Egyptians were fascinated with the sky, and according to Joyce Tyldesley, who co-authored a study on the same findings that was published in the journal Meteoritics and Planetary Science, “the sky was very important to the ancient Egyptians, something that falls from the sky is going to be considered as a gift from the gods.” (2)

While we are on the topic of meteorites, just a year earlier a group of scientists claimed with certainty that tiny fossils uncovered inside a meteorite found in Sri Lanka in late December 2012, are proof of extraterrestrial life. The paper was published in the Journal of Cosmology by Chandra Wickramasinghe, the director of the Buckingham Centre for Astrobiology at the University of Buckingham in the United Kingdom. The study was conducted alongside researchers at the School of Mathematics at Cardiff University and from the Medical Research Institute in Colombo, Sri Lanka. Obviously, the study is surrounded by much controversy, you can read more about that and view the study here.