Huge gold nugget going up for sale in California 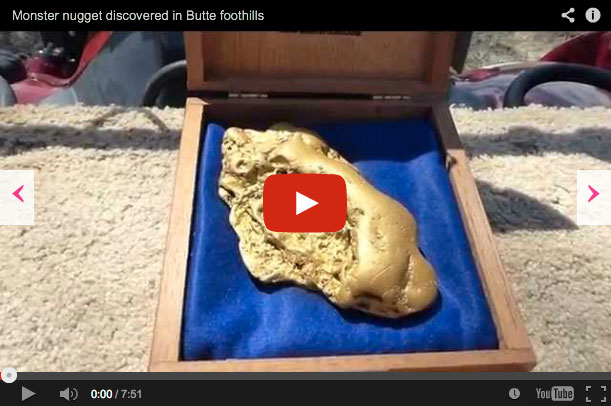 SAN FRANCISCO (AP) – One of the biggest gold nuggets found in modern times in Northern California’s historic Gold Country is going up for sale.

The San Francisco Chronicle reported Wednesday that the nugget’s finder asked dealer Don Kagin to keep his name and the location of the discovery secret.

What’s known is that a gold hunter found it in July on public land in the Butte County mountains. Prospecting for gold is legal on most public lands in the state.

David McCarthy, a coin and rare-minerals expert, told the Chronicle that he took a blindfolded ride to the site of the discovery so he would be satisfied the nugget was genuine.

The gold chunk will be unveiled Thursday at the San Francisco Fall Antiques Show.

Prospectors found many giant gold nuggets in California’s 19th century Gold Rush days. That includes a 54-pound gold chunk found in Butte County in 1859. The Chronicle said its research shows it has been decades since a report of anyone discovering a rock of 6 pounds or over in California.

The finder of the Butte Nugget used a metal detector and told colleagues he initially thought he had come across a pipe or some other “big piece of trash” underground, part-time local prospector Bob Van Camp told the Chico Enterprise-Record.

Worried that the strong reading on the metal detector would mask any signal from surrounding gold nuggets, the man decided to dig it up, said Van Camp, who filmed himself briefly holding the Butte Nugget.