What may be the world’s oldest fragments of the Koran have been found by the University of Birmingham.

Radiocarbon dating found the manuscript to be at least 1,370 years old, making it among the earliest in existence.

The pages of the Muslim holy text had remained unrecognised in the university library for almost a century.

The manuscript had been kept with a collection of other Middle Eastern books and documents, without being identified as one of the oldest fragments of the Koran in the world.

When a PhD researcher, Alba Fedeli, looked more closely at these pages it was decided to carry out a radiocarbon dating test and the results were “startling”.

The university’s director of special collections, Susan Worrall, said researchers had not expected “in our wildest dreams” that it would be so old.

“Finding out we had one of the oldest fragments of the Koran in the whole world has been fantastically exciting.”

The tests, carried out by the Oxford University Radiocarbon Accelerator Unit, showed that the fragments, written on sheep or goat skin, were among the very oldest surviving texts of the Koran.

These tests provide a range of dates, showing that, with a probability of more than 95%, the parchment was from between 568 and 645.

“They could well take us back to within a few years of the actual founding of Islam,” said David Thomas, the university’s professor of Christianity and Islam.

“According to Muslim tradition, the Prophet Muhammad received the revelations that form the Koran, the scripture of Islam, between the years 610 and 632, the year of his death.” 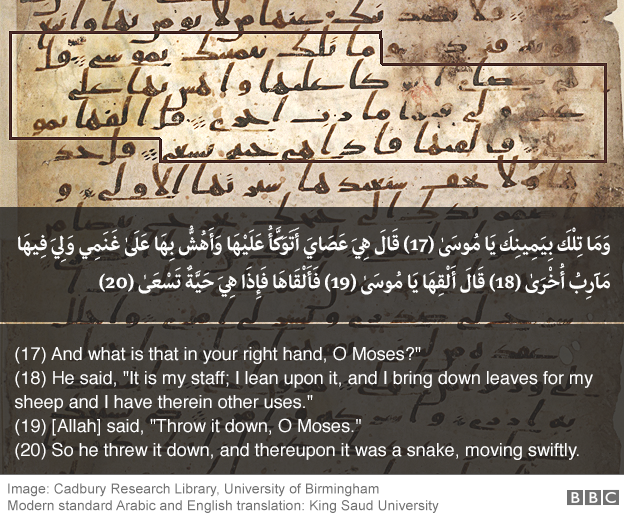 Prof Thomas says the dating of the Birmingham folios would mean it was quite possible that the person who had written them would have been alive at the time of the Prophet Muhammad.

“The person who actually wrote it could well have known the Prophet Muhammad. He would have seen him probably, he would maybe have heard him preach. He may have known him personally – and that really is quite a thought to conjure with,” he says.

Prof Thomas says that some of the passages of the Koran were written down on parchment, stone, palm leaves and the shoulder blades of camels – and a final version, collected in book form, was completed in about 650.

He says that “the parts of the Koran that are written on this parchment can, with a degree of confidence, be dated to less than two decades after Muhammad’s death”.

“These portions must have been in a form that is very close to the form of the Koran read today, supporting the view that the text has undergone little or no alteration and that it can be dated to a point very close to the time it was believed to be revealed.”

The manuscript, written in “Hijazi script”, an early form of written Arabic, becomes one of the oldest known fragments of the Koran.

Because radiocarbon dating creates a range of possible ages, there is a handful of other manuscripts in public and private collections which overlap. So this makes it impossible to say that any is definitively the oldest.

But the latest possible date of the Birmingham discovery – 645 – would put it among the very oldest.

Dr Waley, curator for such manuscripts at the British Library, said “these two folios, in a beautiful and surprisingly legible Hijazi hand, almost certainly date from the time of the first three caliphs”.

The first three caliphs were leaders in the Muslim community between about 632 and 656. Dr Waley says that under the third caliph, Uthman ibn Affan, copies of the “definitive edition” were distributed.

“The Muslim community was not wealthy enough to stockpile animal skins for decades, and to produce a complete Mushaf, or copy, of the Holy Koran required a great many of them.”

Dr Waley suggests that the manuscript found by Birmingham is a “precious survivor” of a copy from that era or could be even earlier.

“In any case, this – along with the sheer beauty of the content and the surprisingly clear Hijazi script – is news to rejoice Muslim hearts.”

The manuscript is part of the Mingana Collection of more than 3,000 Middle Eastern documents gathered in the 1920s by Alphonse Mingana, a Chaldean priest born near Mosul in modern-day Iraq.

He was sponsored to take collecting trips to the Middle East by Edward Cadbury, who was part of the chocolate-making dynasty. 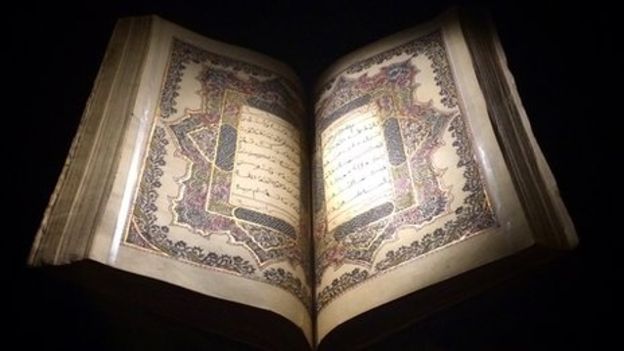 • It was not until 1734 that a translation was made into English, but was littered with mistakes

• On 6 October 1930, words from the Koran were broadcast on British radio for the first time, in a BBC programme called The Sphinx

The origins of the Koran

Discover how the Koran became part of British life line

The local Muslim community has already expressed its delight at the discovery in their city and the university says the manuscript will be put on public display.

“When I saw these pages I was very moved. There were tears of joy and emotion in my eyes. And I’m sure people from all over the UK will come to Birmingham to have a glimpse of these pages,” said Muhammad Afzal, chairman of Birmingham Central Mosque. 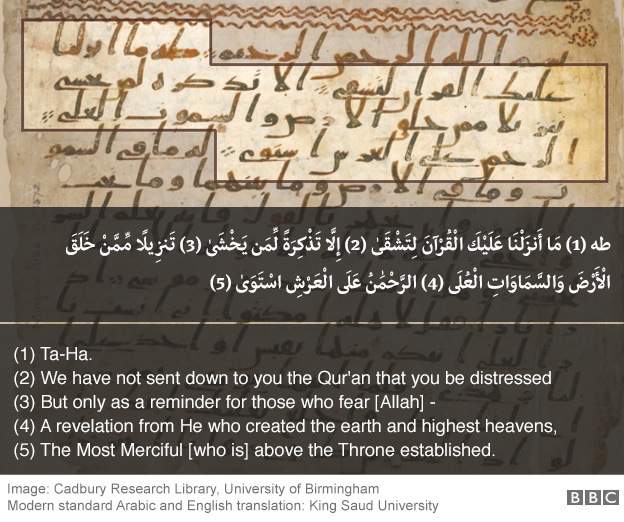 The university says the Koran fragments will go on display in the Barber Institute in Birmingham in October.

Prof Thomas says it will show people in Birmingham that they have a “treasure that is second to none”.