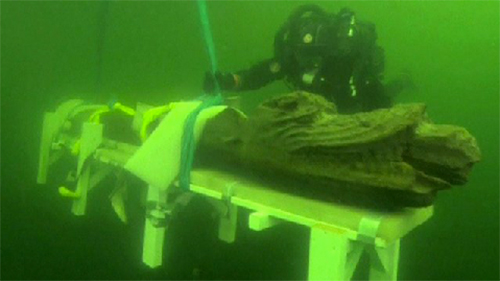 The figurehead from a 15th century ship has been raised from the Baltic Sea near Ronneby, Sweden, more than 500 years after it sank.

The Gribshunden is thought to be the world’s best-preserved late medieval ship.

”It’s a sea monster – and we have to discuss what kind of animal it is,” said Johan Ronnby, professor of marine archaeology.

”I think it’s some kind of fantasy animal – a dragon with lion ears and crocodile-like mouth. And there seems to be something in his mouth. There seems to be a person in its mouth and he’s eating somebody,” he said.