The photos showing militants rigging the temple with explosives and a large explosion were circulated by the jihadist group’s supporters.

Syrian officials and activists said on Sunday that it had been blown up.

The UN’s cultural organisation said the deliberate destruction of Syria’s cultural heritage was a war crime.

Unesco’s director-general, Irina Bokova, accused IS of seeking to “deprive the Syrian people of its knowledge, its identity and history”.

She also expressed outrage at the beheading last week of Khaled al-Asaad, the retired chief archaeologist at Palmyra, who refused to co-operate with IS.

The Temple of Baalshamin was built nearly 2,000 years ago and was considered the second most important structure at Palmyra – the monumental ruins of a great city that was one of the most important cultural centres of the ancient world.

Syria’s director of antiquities, Maamoun Abdul Karim, said IS militants had packed the Graeco-Roman temple with large quantities of explosives and detonated them on Sunday, bringing down the inner sanctum, or cella, and surrounding pillars.

Three of the images published online on Tuesday appear to show men placing barrels of explosives connected with detonating cord around the temple’s interior and on several exterior columns.

Another image shows a large explosion and plume of smoke, and a fifth shows the aftermath, with piles of rubble where the temple used to be.

• Site contains monumental ruins of great city, once one of the most important cultural centres of the ancient world

• Art and architecture, from the 1st and 2nd Centuries, combine Greco-Roman techniques with local traditions and Persian influences

• Site boasts a number of monumental projects, more than 1,000 columns, and a formidable necropolis of more than 500 tombs

• More than 150,000 tourists visited Palmyra every year before the Syrian conflict

IS threat to ‘Venice of the Sands’

Syrian ruins that influenced the West

Your memories of Palmyra

One caption reads: “The complete destruction of the pagan Baalshamin temple.”

The images could not be independently verified, but they carried a logo IS often uses for propaganda from Palmyra, which the group captured from Syrian government forces in May.

The Syrian Observatory for Human Rights, a UK-based group that monitors the conflict in Syria, reported that the temple was destroyed a month ago.

IS has ransacked and demolished several similar ancient sites that pre-date Islam in Iraq, seeing them as symbols of “idolatry”.

Until the temple was brought down, they had only demolished a statue of a lion from Palmyra, though they used the site’s theatre to stage the public execution by children of more than 20 captured Syrian army soldiers. 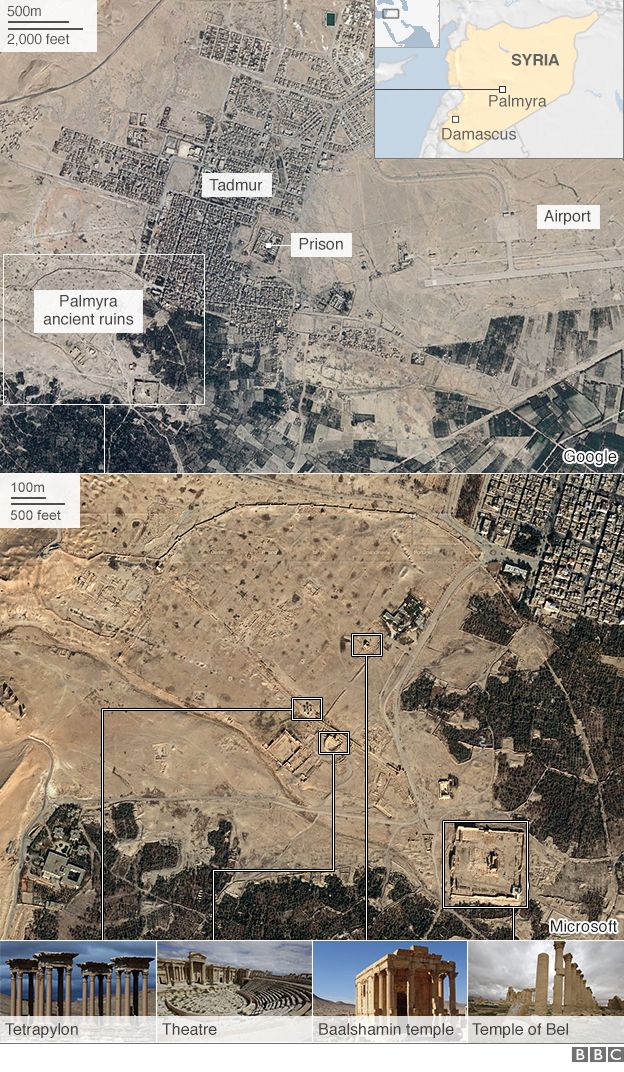