A small cache of silver coins recently found in Israel offers a fascinating look into life during the second century B.C.

The hoard contains 16 silver shekels and half-shekels (tetradrachms and didrachms) that were minted in the city of Tyre and bear the images of the king, Antiochus VII, and his brother Demetrius II.

The hoard was found in April with the participation of local youth during construction of a new neighborhood in the Modi‘in-Maccabim-Re‘ut municipality. The Israel Antiquities Authority announced the find in early June.

Ancient Modiin was the place of origin of the Jewish Hasmonean dynasty that ruled Judea for 227 years from 163 B.C. to 63 A.D. and is where the Maccabean revolt against the Seleucid Greeks started.

Soldiers of Antiochus came to Modiin to force the local Jews to make sacrifice to the heathen gods and forsake their laws, according to David Hendin in Guide to Biblical Coins.

According to a statement from IAA excavation director Avraham Tendler released by the organization, “The cache may have belonged to a Jew who hid his money in the hope of coming back to collect it, but he was unlucky and never did return.”

The treasure was hidden in a rock crevice, up against a wall on an impressive agricultural estate that was discovered during the excavation there.

What is in the hoard?

According to Tendler, the cache is “compelling evidence that one of the members of the estate who had saved his income for months needed to leave the house for some unknown reason. … It is exciting to think that the coin hoard was waiting here 2,140 years until we exposed it.”

The cache contains one or two coins from every year between 135 and 126 B.C., a collection familiar to modern day hobbyists.

According to Dr. Donald Tzvi Ariel, the head of the Coin Department at the Israel Antiquities Authority, “It seems that some thought went into collecting the coins, and it is possible that the person who buried the cache was a coin collector. He acted in just the same way as stamp and coin collectors manage collections today.” 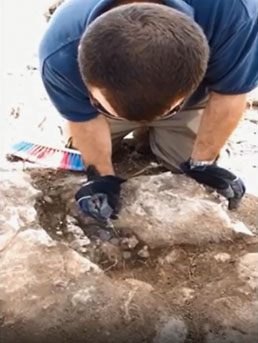 (Image Above: One of the excavation expedition members works to recover the hoard, which was found during construction of a new neighborhood. Image courtesy of the Israel Antiquities Authority.)

“Numerous” bronze coins minted by the Hasmonean kings were also discovered in the excavation. They bear the names of the kings such as Yehohanan, Judah, Jonathan or Mattathias and the title High Priest and Head of the Council of the Jews. 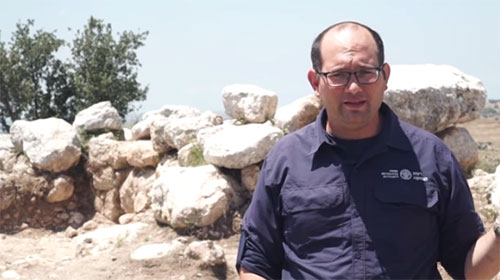