The coins are worth an estimat­ed $1 million or more, according to John Albanese, who brokered the deal between the salvors and the firms now selling the coins.

The treasure was found in only six feet of water just 100 feet from the beach in Vero Beach, Fla., by salvors working for 1715 Fleet-Queens Jewels LLC.

The discovery was “the largest find of gold coins from the 1715 Plate Fleet wreck in 30 years,” said Brent Brisben, who owns the Capitana ship that was used during the recovery, and is co-founder and operator of 1715 Fleet-Queens Jewels.

Brisben and 1715 Fleet-Queens Jewels in 2010 purchased the treasure rights to the 1715 Plate Fleet from heirs of Mel Fisher and his family. Since taking over the rights, Brisben and subcontractors have recovered more than $6.5 million worth of treasure, he said.

“To be the first person to touch these coins in 300 years, it’s a magical experience and one I’ll never forget,” Brisben told Coin World. “To have it happen literally 300 years to the day is pretty much a magical thing.”

The anniversary find was worth some $4.5 million, Brisben said, and included 300 gold coins of various sizes, and seven gold Royal presentation coins (these were specially prepared with the intent of being used as royal gifts and thus have limited mintages and are extremely rare).

In total, after several salvage efforts, 350 gold coins and nine Royals were recovered in 2015, with the Royals representing much of the value. In addition, one of the contractors on June 17, 2015, discovered 21 coins worth an estimated $1 million.

Some of the coins from all the recoveries were given by the company to its crewmembers and subcontractors as their share of the recoveries, and all the large Royal presentation pieces were privately sold earlier this year to anonymous collectors for an average of $275,000 each, Brisben said.

The most expensive Royal was sold for $425,000, according to Brisben. The state of Florida received 1711 and 1712 examples of the Royal presentation coins as part of its 20 percent reward, for permanent residence in the Museum of Florida History in Tallahassee.

The fabled 1715 Fleet convoy of 12 ships loaded with New World treasure set sail for Spain from Havana, Cuba, on July 24, 1715. In the early morning hours of July 31 a fierce hurricane sank all the ships except one off the eastern coast of Florida. More than 1,000 people were killed in the storm and resulting shipwrecks.

Famed treasure hunter Kip Wagner in the late 1950s and early 1960s identified several of the wrecks and began salvage. According to Brisben, six of the 11 ships have been located, and all remain actively salvaged.

The heyday for salvage of these wrecks was the 1960s and, to a lesser extent, the 1980s, said Brisben.

“That was really the last splashy salvage period on these wrecks,” he said.

Now the treasure comes up in dribs and drabs, said Brisben, adding, “When you get down there and the bottom is paved with gold it’s a unique experience.”

Brisben began his treasure hunting career with a bang, finding 50 gold and 40 silver coins inside the breech of a three-and-a-half foot cannon in 2010, just 17 days after purchasing salvage rights.

“I thought, this stuff’s pretty easy — I think I’m going to enjoy this,“ Brisben said, during a 2015 TEDx talk in Munich.

Some of the coins retrieved from the cannon are coming to market.

Despite his early successes, finding treasure has proved difficult. Brisben noted that 2011 and 2012 were a “very dry period, with just four or five gold coins found, though there were some interesting artifacts.”

Things got better in 2013 when salvors found 50 gold 1-escudo coins at one site. It is rare to find any 1-escudo coin, to begin with, and even more rare in quantity, and without other denominations in the cache, he said. Some of those 1-escudo coins are also among the coins now being sold.

The coins range in denominat­ion from 1 escudo to 8 escudos. They were struck in Colombia, Mexico and Peru and are dated in the era between 1692 and 1715, during the reigns of Spanish Kings Charles II and Philip V.

All but five of the available coins are in Mint State condition.

NGC created special insert labels for the 1715 Fleet coins, including a special designation for the coins recovered from the cannon.

Blanchard and Company and Monaco Rare Coins are the main firms to sell the 295 coins.

According to a press release, NGC Chairman Mark Salzberg said, “A quantity of Uncirculated Spanish gold coins such as this simply does not exist outside of a shipwreck discovery.”

NGC worked directly with the recovery group to not only preserve the important provenance of these coins, but also the story of their individual recoveries. For the first time, specific dive missions and finds are recorded on the NGC certification label, Salzberg said. In addition to the NGC encapsulation, each coin will be accompanied by a certificate of authenticity signed by Brisben, along with the original, numbered archeological tag that was used by the expedition crew to denote each item as it was discovered and recovered. The unique tag number is also indicated on the certificate of authenticity for each coin.

Brisben has a connection to another famous American treasure find: Brisben’s great-great-great grandfather, Daniel Beaver, died in the fabled “ship of gold,” the SS Central America, that sank off the South Carolina coast in a hurricane in September 1857 while carrying tons of California Gold Rush coins and gold bars to New York City. 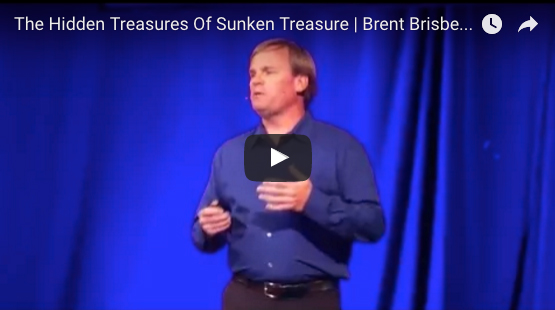