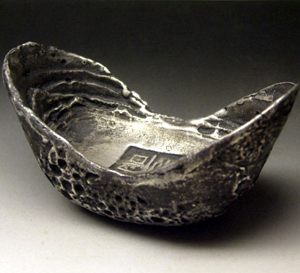 (Image above: This silver 2-tael sycee is similar to the gold and silver sycees being excavated
at the site of a battle during a 1647 peasant revolt in China.)

What was thought to be only a legend has proved to be fact. As of early March, Chinese archaeologists are busy recovering more than 10,000 gold and silver objects, including many coins and primitive money items, from the bottom of a river in southwestern Sichuan Province.

Rumors circulated for centuries that Zhang Xianzhong (1606-1647), also known as Chang Hsien-chung or the “Yellow Tiger” dumped an enormous treasure into the Minjiang River where the river passes through Jiangkou, Meishan. You would think authorities would have gotten suspicious when in 2005 local farmer Yang Fuhua discovered what the Oct. 18, 2016 Global Times newspaper described as a silver ingot, an “ingot” that, according to a photograph obtained when writing this article, appears to be a large silver sycee or yuanbao. Sycees are a precious metal primitive money currency used in China from the time of Zhang through the early 20th century.

Sycees were made by silver or gold smiths for local exchange. Sycees were not regulated by a central bank or government mint. Their shapes and the detail on them vary greatly for this reason. Square and oval sycees are more commonly encountered; however, some are shaped as a boat, flower, tortoise and in other shapes. Money exchangers called shroffs tested the metal purity and evaluated the weight of each sycee in taels and tael-decimal subdivisions in mace, candareen and cash.

Yang’s 2005 find was not a well-kept secret. Apparently a vast trove of Zhang’s treasure, which appears to include numerous gold and silver sycee as well as bronze cash coins, was soon being sold illegally.

The evolution of the discovery of the treasure became even more incredible. There were persistent rumors of local families going “fishing” late at night or local farmers coming to an understanding when someone asked to “sail” on the river. Poor local families began purchasing new automobiles or houses. Police reportedly became suspicious once scuba divers were observed in the river.

In 2016 Liao Mingfang, Shuangjiang Village party secretary, told the Global Times that officials from Pengshan Cultural Relic Bureau asked people to stop taking the objects at the site. Liao posed a question through the newspaper: How could you stop someone from selling such relics for sums much higher than what a farmer could make working the land?

According to an Oct. 17, 2016, Chongqing Morning Post report, a two-year investigation by Meishan police resulted in 70 arrests involving 328 cases of illegal trafficking in ancient cultural relics in 10 provinces, all being Zhang treasure. Thousands of relics including what were described as “eight first-class relics, 38 second-class relics, and 54 third-class relics worth more than 300 million yuan (about $45 million US)” were recovered.

According Article 74 of Law of the People’s Republic of China on Protection of Cultural Relics, all such items must be reported to authorities. The maximum fine that can be imposed is 50,000 yuan or about US$7,242.

The Sichuan Provincial Cultural Relics and Archaeology Research Institute finally took control of the area during early 2017. On March 20 the institute’s director, Gao Dalun, told the state-run news agency Xinhua the find includes a large amount of gold, silver and bronze coins and jewelry as well as iron weapons such as swords, knifes and spears. Gao indicated that the characters carved onto gold and silver utensils are still clear and that embossed patterns on jewelry show exquisite craftsmanship.

Chinese archaeologist Wang Wei was quoted in a March 20 Xinhua news report as saying, “The objects have helped identify the area where the battle was fought and are direct evidence of this historical event.”

Recent official photographs from the find depict a gold seal, gold sycee (the sycee identified by the Xinhua agency as a gold ingot) and large numbers of cash coins.

Local stories tell of many ships that were set on fire during a battle in 1647, their rebel leader ordering his men to dump gold and other precious items into the river, hoping to recover them later. Zhang ruled Sichuan briefly, committing genocide according to William T. Rowe in Crimson Rain: Seven Centuries of Violence in a Chinese County.

According to Rowe, Zhang “engaged in one of the most hair-raising genocides in imperial history.”

Zhang was allegedly killed by a Manchu archer at his own camp when he was betrayed by Liu Chin-chung (Liu Zinzhong), one of Zhang’s officers. Zhang had been leading a peasant revolt, the revolt failing following Zhang’s death. Zhang’s near the end of the Ming dynasty helped usher in the Qing dynasty.

This article was originally printed in World Coin News