A meteor crashing in Russia’s Ural mountains has injured at least 950 people, as the shockwave blew out windows and rocked buildings.

Most of those hurt, in the Chelyabinsk region where meteorites fell, suffered cuts and bruises but at least 46 remain in hospital.

A fireball streaked through the clear morning sky, followed by loud bangs.

A large meteorite landed in a lake near Chebarkul, a town in Chelyabinsk region.

The meteor’s dramatic passing was witnessed in Yekaterinburg, 200km (125 miles) to the north, and in Kazakhstan, to the south.

“It was quite extraordinary,” Chelyabinsk resident Polina Zolotarevskaya told BBC News. “We saw a very bright light and then there was a kind of a track, white and yellow in the sky.”

“The explosion was so strong that some windows in our building and in the buildings that are across the road and in the city in general, the windows broke.”

Officials say a large meteor partially burned up in the lower atmosphere, resulting in a number of meteorites falling earthwards.

Thousands of rescue workers have been dispatched to the area to provide help to the injured, the emergencies ministry said.

The Chelyabinsk region, about 1,500km (930 miles) east of Moscow, is home to many factories, a nuclear power plant and the Mayak atomic waste storage and treatment centre.

One Russian politician said the event was not a meteor shower but a US weapons test, Russia’s Interfax news agency reported.

Vladimir Zhirinovsky, the leader of the ultra-nationalist Liberal Democratic Party, was quoted as saying: “Meteors are falling. Those are not meteors, it is Americans testing their new weapon.” 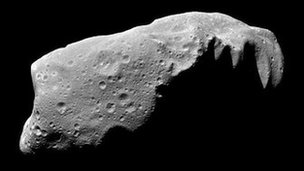 Chelyabinsk’s health department said 985 people had sought medical treatment, including 204 children, Interfax reported. Two people in the town of Kopeysk were in a serious condition, it added.

The governor of Chelyabinsk region, Mikhail Yurevich, was quoted elsewhere as saying 950 people had been hurt, two seriously.

Chelyabinsk resident Sergei Serskov told BBC News the city had felt like a “war zone” for 20 to 30 minutes.

“I was in the office when suddenly I saw a really bright flash in the window in front of me,” he said.

“Then I smelt fumes. I looked out the window and saw a huge line of smoke, like you get from a plane but many times bigger.”

“A few minutes later the window suddenly came open and there was a huge explosion, followed by lots of little explosions.”

In Yekaterinburg, 36-year-old resident Viktor Prokofiev was driving to work when he witnessed the event.

“It was quite dark, but it suddenly became as bright as if it was day,” he was quoted by Reuters as saying.

Governor Yurevich reported that a meteorite had landed in a lake 1km outside Chebarkul, which has a population of 46,000.

A Russian army spokesman said a crater 6m (20ft) wide had been found on the shore of the lake.

The Russian Academy of Sciences estimates that the meteor weighed about 10 tonnes and entered the Earth’s atmosphere at a speed of at least 54,000 km/h (33,000mph).

It would have shattered about 30-50km (18-32 miles) above ground, with most of the meteor burning up.

Scientists have played down suggestions that there is any link between the event in the Urals and 2012 DA14, an asteroid passing the Earth on Friday at a distance of just 27,700km (17,200 miles) – the closest ever predicted for an object of that size.

Prof Alan Fitzsimmons, of the Astrophysics Research Centre at Queen’s University Belfast, said there was “almost definitely” no connection.

“One reason is that 2012 DA14 is approaching Earth from the south, and this object hit in the northern hemisphere,” he told BBC News.

“This is literally a cosmic coincidence, although a spectacular one.”

Such meteor strikes are rare in Russia but one is thought to have devastated an area of more than 2,000 sq km (770 sq miles) in Siberia in 1908.