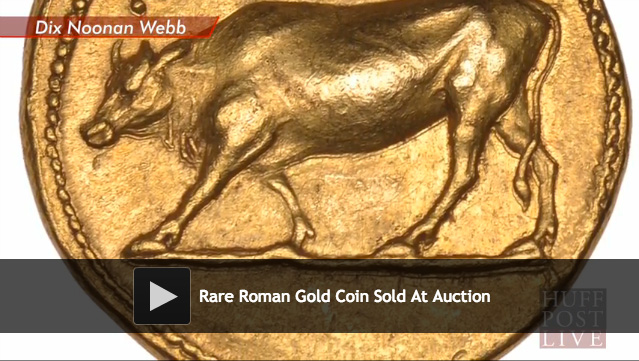 One of the most sought after coins on the planet sold at auction for more than three-quarters of a million dollars.

A Roman gold coin, minted more than 2,000 years ago, depicting the first and greatest emperor of the Roman Empire, Augustus Caesar, sold for nearly 785,000 U.S. dollars in a U.K. auction.

The reverse side of the coin depicts a heifer, believed to be based on a lost Greek sculpture. The gold Roman coin is called an aureus, and this is only one of 22 known to have survived.

One of the auctioneers said in a press release, “This was a strong price for a truly extraordinary coin. Not only is it a unique type of an already very rare coin but its condition after more than 2,000 years is extremely fine and visually it is a beautiful work of art. It also represents an epic period when Augustus built an empire that changed the course of human history.”

While the exact date of the minting is unknown, the Dix Noonan Webb auction house estimates it was sometime around 27 to 18 BC, as prior to 27 BC Augustus Caesar, the great nephew of Julius Caesar, was referred to by his birth name, Octavian. He took on the name Augustus, meaning “dignified” or “stately” as he began to dramatically enlarge the Roman Empire.

Augustus was such a great ruler, they even named the month of August after him.