Forgotten fossil found to be new species of ichthyosaur

A fossil stored in a Doncaster museum for 30 years and thought to be a plaster copy has turned out to be a new species of ancient reptile.

A young palaeontologist working with the University of Manchester found the fossil in 2008, in the collections of Doncaster Museum and Art Gallery.

He realised it was the 189-million-year-old remains of an ichthyosaur – an extinct marine reptile.

Further study confirmed it to be a previously unknown species.

The finding has now been published in the Journal of Vertebrate Paleontology.

Dean Lomax, the 25-year-old palaeontologist who studied the specimen, said it was so well preserved he could determine the contents of its stomach.

“We could see tiny hook-shaped features that were actually the hooks from the tentacles of squid,” he said.

“So we know what its last meal was.”

Mr Lomax worked with Prof Judy Massare, from the State University of New York, comparing the specimen’s fossilised bones with those of almost 1,000 other ichthyosaurs in museums in the US and Europe.

Mr Lomax explained that subtle anatomical features in its fin bones set the species apart from others.

It is not uncommon to find ichthyosaur fossils in England. The sharp-toothed marine reptiles swam in large numbers in the seas around Britain when the dinosaurs roamed.

This particular specimen was found in the rocks of Dorset’s Jurassic Coast in the early 1980s and brought to the museum, so it is not clear how it was eventually mistaken for a copy.

Dr Silvia Danise from Plymouth University said its “rediscovery” was a “striking example of how important museum collections are for scientific research”.

“Collections are treasures that show their value each time we’re able to look at them with a different perspective, and by asking new scientific questions,” she told BBC News.

Dr Blanca Huertas, from the Natural History Museum in London, pointed out that there were still many species to discover in museum collections.

“Sometimes we discover things in the field,” she said, “but the collections are an incredible source of opportunities, since visiting them, people can study specimens and collections from hundreds of places across the entire planet and travel in time.” 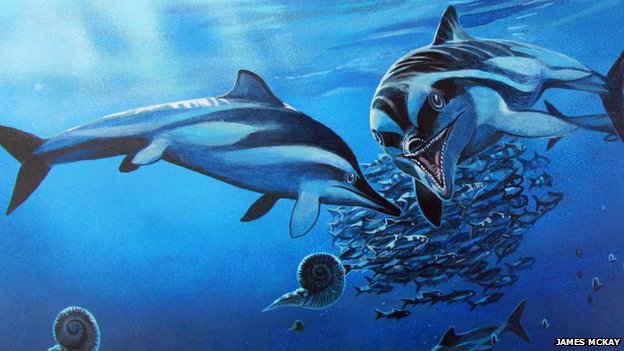 Source: Encyclopaedia of Paleontology.The coins included half-cent, one-cent, 10-cent and 25-cent coins. Hatchfield said some of the coins, those cleaned before they were buried, looked brand new. Others were corroded or had newsprint stuck to them.

This new species has now been named Ichthyosaurus anningae – in honour of Mary Anning, the British fossil-hunter who discovered the first ichthyosaur on the Dorset coast in about 1811.

The hope now is that news about the significance of this ancient specimen might help track down the fossil hunter who found it.

Dr Stephen Brusatte, a palaeontologist from the University of Edinburgh added that there was “a whole lot more still to find out there”.

He told BBC News: “Palaeontology is a unique science because you don’t need an advanced degree or specialised training to find a fossil, just patience and a keen set of eyes.”