Thief gets away with $1.6m bucket of gold flakes 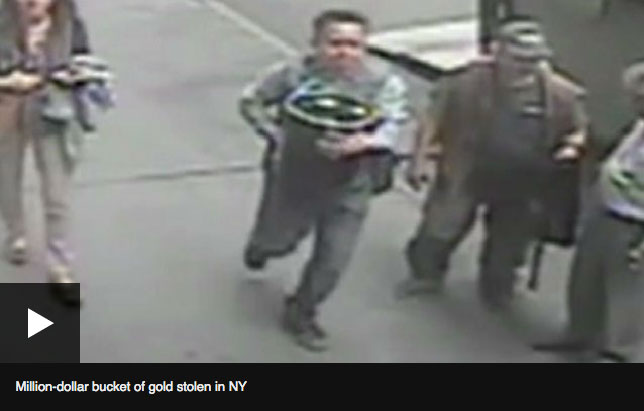 Surveillance video showed the theft happened in just 20 seconds while the armoured truck was briefly unattended.

The man struggled to carry the gold, taking an hour to lug his loot on a usually 10-minute walk, footage showed.

Authorities believe the man is hiding out in Florida’s Orlando or Miami area, but he is still at large.

“I think he just saw an opportunity, took the pail and walked off,” said NYPD Detective Martin Pastor, adding he believed the man had no idea what the bucket contained.

The suspect appeared to be loitering near the truck in busy Midtown Manhattan on 29 September when one of the guards left the truck to make a delivery.

A second guard stepped away to grab his mobile phone from the front seat of the truck when the thief seized the moment and made off with the bucket down West 48th Street.

The man is then seen on video carrying the five-gallon pail through the crowded streets of Manhattan, pausing to catch his breath from the weight of the gold, before he disappeared.

Police described the suspect as a Hispanic male, about 5ft 6in tall, 150lb and between 50 and 60 years old.