Protoceratops Dinosaur found with its own tracks

A fossil housed for half a century in a Polish museum has turned out to be the first dinosaur skeleton preserved in its own tracks, say scientists.

A recent examination of the 80-million-year-old specimen revealed a single footprint preserved in the rocks encasing the fossilised bones.

Polish and Mongolian fossil hunters first unearthed it in 1965 in Mongolia.

Scientists now report the results of its re-examination in the journal Cretaceous Research.

The dinosaur is a Protoceratops, and since this is one of the most common dinosaurs found in the rich fossil beds of the Gobi Desert, it was not deemed to be very significant. But the scientists say it is the first example of a dinosaur being preserved with its own footprints.

Polish palaeontologists Grzegorz Niedzwiedzki and Tomasz Singer spotted the footprint while they were preparing the fossil for display at the Polish Academy of Sciences in Warsaw.

His colleague, University of Colorado at Denver geologist Martin Lockley, told BBC Nature that this really was “a first”.

“Generally, we find it very hard even to match dinosaurs with their footprints at the species level,” he explained.

“We have a couple of examples in the literature where we say, ‘we’re almost certain that this footprint belongs to this species’, but this is an animal actually dead in its tracks.”

A single, preserved footprint can be seen in the rocks encasing the fossil. Prof Lockley suggests that some of the rock discarded when scientists prepare dinosaur skeletons could contain ancient clues about the lives of the extinct beasts.

“Traditionally, palaeontologists look for nice skeletons, and in order to get those out of the rock, they’re discarding the matrix. So lots of tracks have been overlooked.”

Since the 1990s, and with some spectacular fossil footprint discoveries from China, research into dinosaur tracks has received much more attention.

But the deposits that often contain trackways have not been the same as those that contain skeletons, as Dr Paul Barrett, a palaeontologist from London’s Natural History Museum explained.

“Whereas trackways usually come from beach deposits, bones are normally found in river channels, where perhaps the animals drowned and were quickly buried and preserved,” Dr Barrett told BBC Nature.

“So this discovery is a neat one-off.”

“Unfortunately, though,” he added, “this doesn’t solve any other dinosaur mysteries for us; it doesn’t help us to match another species to its footprints.” 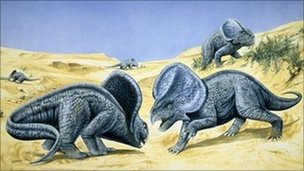 Prof Lockley hopes that it will make dinosaur hunters pay more attention to the footprints they might be missing.

“Since this part of Mongolia was desert during the Cretaceous period, it’s not thought to be ideal for finding tracks,” he said.

“But I think a lot of these dinosaurs could have been caught in flash flooding. They could have been buried in their nests – just hunkered down. And if you want to become a fossil, you need to get buried quickly.”

There may be lots more of these types of discoveries yet to be made.

“This shows that some things don’t come to light unless you’re looking for them,” Prof Lockley told BBC Nature. “This discovery is a very small inroad into a very big gap.”

He said that studying tracks was crucial to learning more about dinosaur behaviour.

“When palaeontologists deal with skeletons, they’re dealing with death and decay,” he said.

“But with tracks you can tell how much it weighed, how it moved, if it was running or walking. You can even tell if it was limping.

“With tracks you’re dealing with the living animals.”