Italy says it will unblock 2m euros (£1.6m) in emergency funding to save the ancient city of Pompeii, after flooding caused walls to collapse.

A number of structures, including the Temple of Venus and Roma, were damaged by heavy rainfall on Sunday and Monday.

The decay prompted calls for action from the European Union and the United Nations.

The site, where volcanic ash smothered a Roman city in AD79, has suffered slow degradation for many years.

It is one of the world’s greatest archaeological treasures.

Every year, some 2.5m tourists visit Pompeii, which sits near the southern city of Naples.

Despite the money they generate, there have been allegations that the city – designated a World Heritage site by the UN cultural organisation Unesco – has been neglected and underfunded.

The new plan was adopted at an emergency meeting on Tuesday.

Italian Culture Minister Dario Franceschini said he was “unblocking many measures which will get the machine working”.

He added the EU could be “sure that Italy is taking care of Pompeii, both in terms of emergency measures and in the long term”. 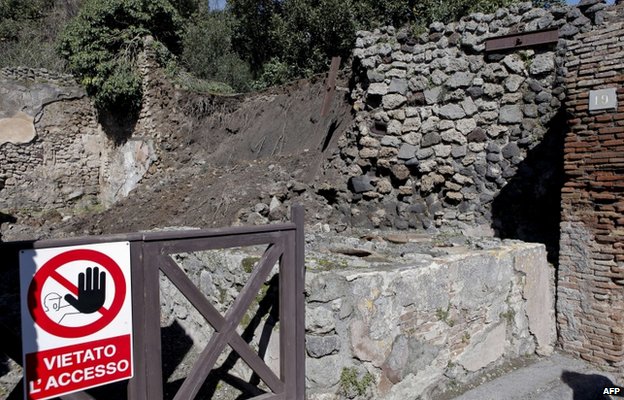 The wall of an ancient shop also collapsed over the weekend

The money will be used for routine maintenance. In addition the government will take steps to protect vulnerable areas of the landmark site.

Pompeii’s degradation has been a source of constant concern and embarrassment for the Italian authorities, the BBC’s Alan Johnston, in Rome, reports.

The EU has made substantial funds available for the care and restoration of the site, but the money does not appear to have been put to use swiftly, our correspondent explains.

The EU’s Regional Policy Commissioner, Johannes Hahn, said that “every collapse is a huge defeat”.

“Pompeii is emblematic not only for Europe, but also for the world,” he said.

The Italian media is blaming the government’s slow action on mismanagement and bureaucratic delays.