The story of the ‘most complicated’ watch in the world

The most complicated handmade watch, the Henry Graves Supercomplication, has been sold at auction for 20.6m Swiss francs (£13.4m), writes Luke Jones.

A “complication” is a technical term referring to any feature on a watch which is in addition to simply telling the time – and Henry Graves Jr wanted more than anyone else.

The Supercomplication, made by Patek Philippe in 1932, has 24 of them including Westminster chimes, a perpetual calendar, sunrise and sunset times, and a celestial map of New York as seen from Graves’s apartment on Fifth Avenue.

But for a “very flamboyant time he was a strangely quiet man”, says Stacy Perman, author of A Grand Complication. His father was a “figure of the gilded age of American finance”, but Graves was more a man of leisure. He was a banker, but not “nine to five”, notes Perman.

This was the tail end of the “golden age of watchmakers”. “Until the advent of the automobile they were considered the most innovative makers in the world,” Perman explains.

Graves was an “incredibly keen” sportsman, which may have drawn him to the increasingly competitive field of watchmaking. The Geneva Observatory Timing contest, the “watch Olympics” as Perman calls it, pitted timepieces against each other for prizes and Graves took a close interest in it.

• Maps the correct spacing and magnitude of the stars

• The map rotates with the sky 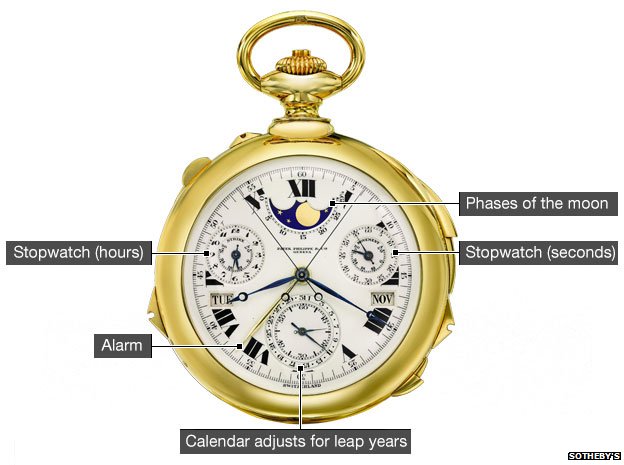 The Supercomplication was part of an “unofficial competition” with the automotive pioneer James Packard, says Daryn Schnipper, chairman of Sotheby’s watch division.

A man of “self-made wealth”, Packard was fascinated with complicated watches and had an edge on Graves because of his “engineering mind”, says Perman.

The Packard watch, with 10 complications, had been the “piece de resistance”. It featured the first sky chart ever on a watch – a celestial map of the sky above his home in Ohio made with 500 gold stars.

Graves commissioned the Supercomplication watch in order to beat Packard’s.

It was commissioned in 1925 but was not delivered to him until 1933. It has 900 parts and remains the most complicated watch built without the assistance of computers, according to Sotheby’s. One of its functions shows sidereal time, which is based on the amount of time it takes the Earth to make two consecutive transitions of a meridian by a fixed star. A sidereal day is approximately 23 hours, 56 minutes and 4.1 seconds.

• The hours, minutes and seconds of sidereal time (3)
• The time of sunset and sunrise (2)
• The equation of time