Divers working at a Russian lake have recovered a half-tonne chunk of the space rock that exploded over Chelyabinsk earlier this year.

The object plunged into Lake Chebarkul in central Russia on 15 February, leaving a 6m-wide hole in the ice.

Scientists say that it is the largest fragment of the meteorite yet found.

More than 1,000 people were injured when a 17m, 10,000-tonne space rock burned up over Central Russia, breaking windows and rocking buildings.

Live footage showed a team pull out a 1.5-metre-long (five-foot-long) rock from the lake after first wrapping it in a special covering and placing it on a metal sheet while it was still underwater. 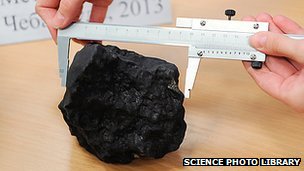 The rock broke into three parts as it was pulled from the depths.

Once ashore, it was placed on top of a scale for weighing.

Dr. Caroline Smith, curator of meteorites at London’s Natural History Museum, confirmed that the object was a meteorite from characteristic features known as fusion crust and regmaglypts, which are obvious in images.

She told BBC News: “Fusion crust forms as the meteoroid is travelling through the atmosphere as a fireball.

“The outer surface gets so hot it melts the rock to form a dark, glassy surface crust which we term a fusion crust. Regmaglypts are the indentations, that look a bit like thumbprints, also seen on the surface of the meteorite.”

“This chunk is most probably one of the top 10 biggest meteorite fragments ever found.”

The divers’ mission had been hampered by a number of factors. The rock fragment lay at 13m depth, not 6m or 8m as was originally thought.

The Vesti 24 rolling news channel reported that divers had already recovered more than 12 pieces from Lake Chebarkul since the incident on 15 February.

The station said that only four or five of them had turned out to be real meteorites.